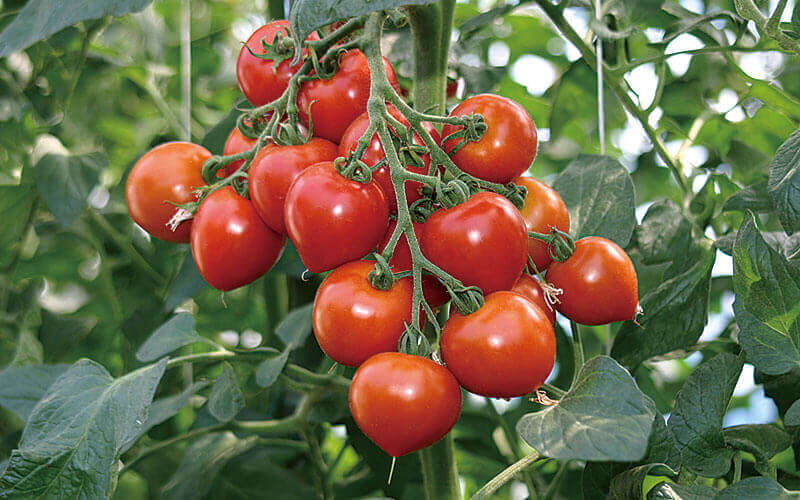 Small tomatoes grown in parts of Fukui Prefecture with sandy soil, known for their fruity sweetness and high nutritious value. Koshi no Ruby Tomatoes are grown with such care and are so delicious that they are offered up to the imperial family, and they are in season from June through November. 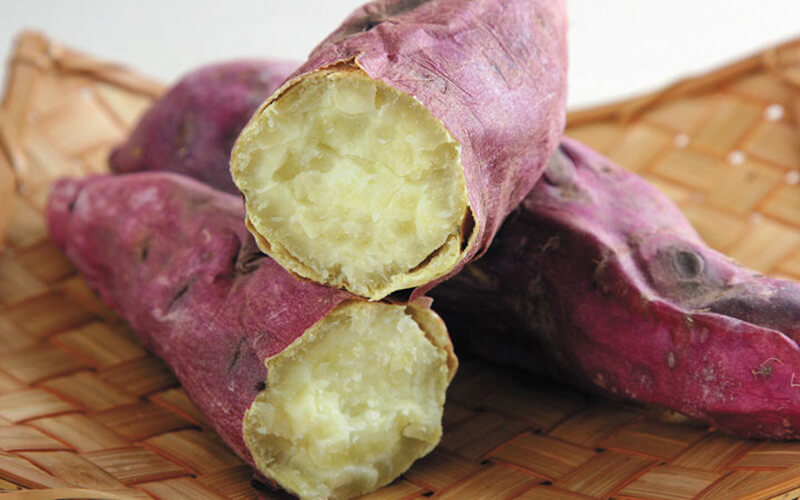 Awara City / Throughout the year

Premium brand-name sweet potatoes grown in the ruddy soil of the Tomitsu region of Awara City, and beloved nationwide. Their perfectly balanced moisture gives them a great sweetness and a wonderful texture. Soba buckwheat noodles with grated daikon radish seems like a simple dish, yet it has a surprisingly complex flavor, and has recently drawn attention as part of a macrobiotic diet. The different variations you'll find in different regions of Fukui make it a great dish to try everywhere to compare them. Katsuyama City / Throughout the year

A local favorite, made by pouring dashi soup with red kamaboko fish cake and mitsuba on top of rice, garnished with a bit of nori seaweed and wasabi. Popular at wedding parties and other celebrations in the area due to its auspicious nature. 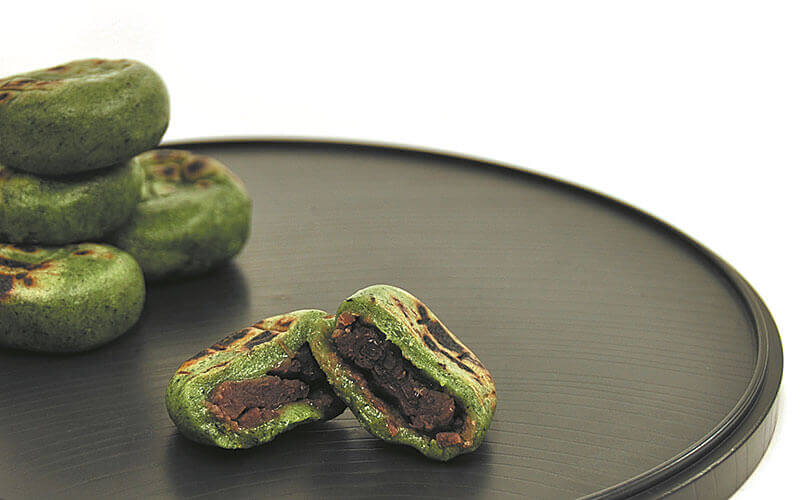 Katsuyama City / Throughout the year (Limited seasons at some shops)

Kachiyama Oyaki dumplings, sold by shops throughout the Katsuyama area, have more mugwort mixed in than ordinary oyaki dumplings, giving them a rich green color that goes nicely with the delicious browning from the grill on their surface. Fukui Prefecture is known for its prodigious snowfalls, as well as these traditional handicrafts. The harsh winters gave rise to high-quality long-jointed bamboo and moso bamboo that can handle the cold, and this bamboo has long been used to produce baskets, flower holders, and more. 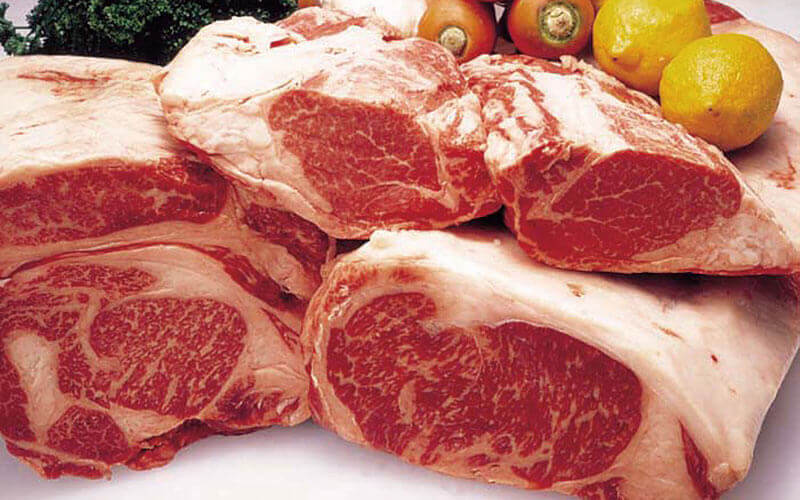 Awara City and Sakai City / Throughout the year

Wakasa Beef maintains unusually high quality standards: out of the five ranks of quality, only beef from the top two ranks earns the right to be sold as Wakasa Beef. Savor its melt-in-your-mouth tenderness and exceptional flavor. 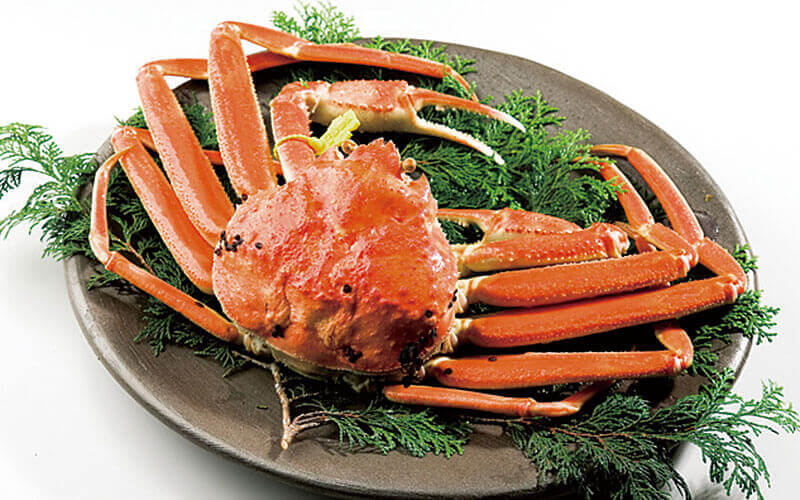 Long considered one of Japan's favorite varieties of crab for its rich, sweet flavor. Mikuni and Hashitate Fishing Ports pull in some of Japan's greatest hauls of snow crab — during crab season, from early November through March, many people visit the Echizen-Kaga area from all over Japan simply to enjoy snow crab. 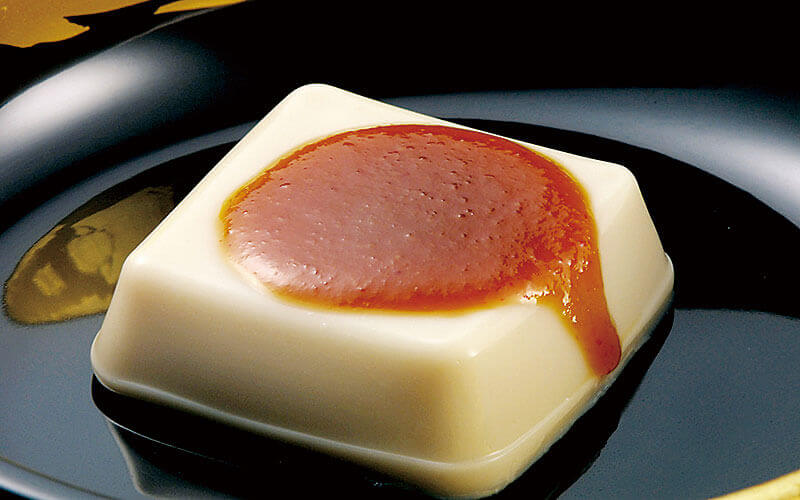 Eiheiji Town / Throughout the year

An iconic example of the Shojin-ryori Buddhist Cuisine tradition handed down from generation to generation by the monks training at Eiheiji Temple. Taking the time and effort to prepare it properly gives it a smooth texture and a rich flavor, making it a popular souvenir. 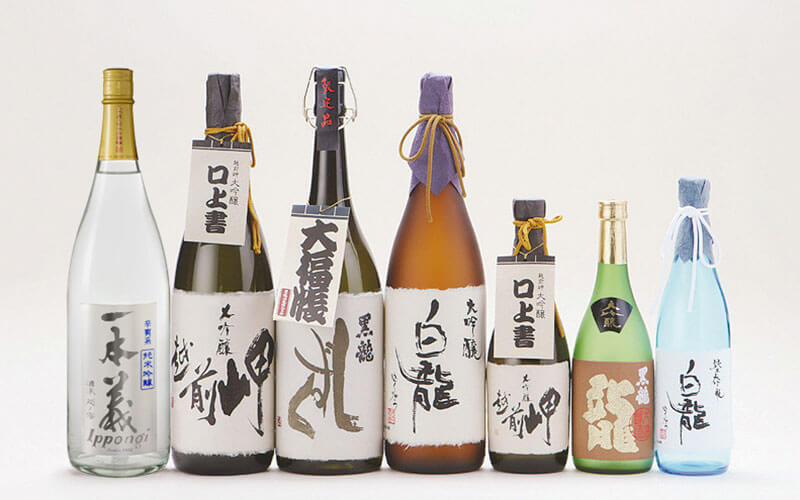 Entire Echizen-Kaga Area / Throughout the year

The Echizen-Kaga Area is known for its bitterly cold winters and pure water from Mt. Hakusan that helps grow delicious rice, enabling the production of truly outstanding sake known nationwide. 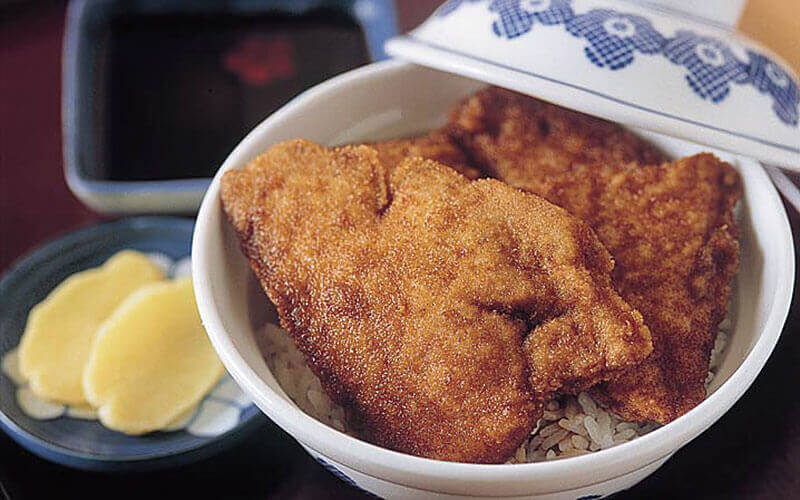 In Fukui, the most popular way to eat pork cutlets is in a Sauce Katsu-Don Pork Cutlet Bowl: freshly fried pork cutlets are flavored with a Worcestershire sauce-based sauce and served on top of hot rice, for this Fukui favorite. 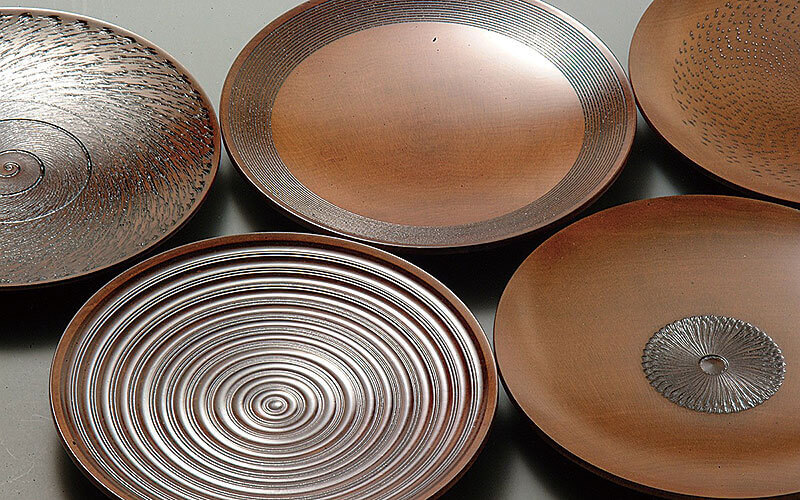 These traditional handicrafts boast four centuries of history. Yamanaka lacquerware is perhaps best known for outstanding turned wooden bowls, given a lacquer finish that makes the most of the wood grain. The Yamanaka area's exceptional wood-turning techniques include producing thin-walled items and decorative carving, and the area produces some of Japan's largest quantities of lacquerware. 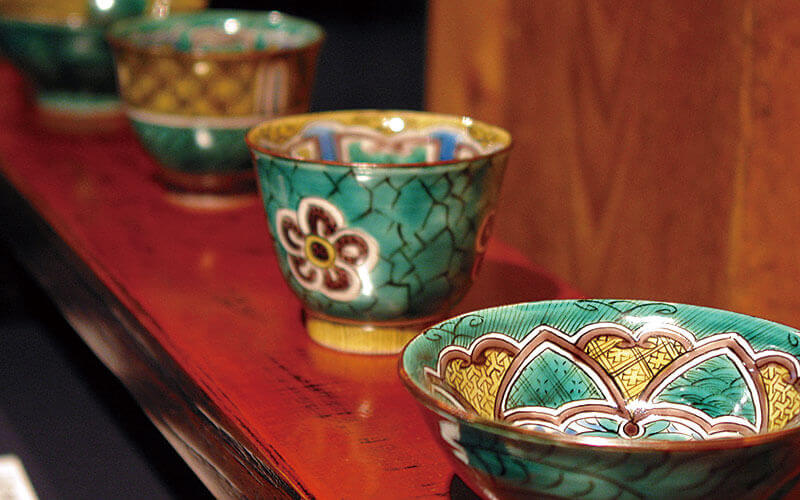 Kutaniyaki Ceramics have some 360 years of history, and the bold designs and bright colors of these traditional handicrafts have drawn praise from throughout Japan and around the world. 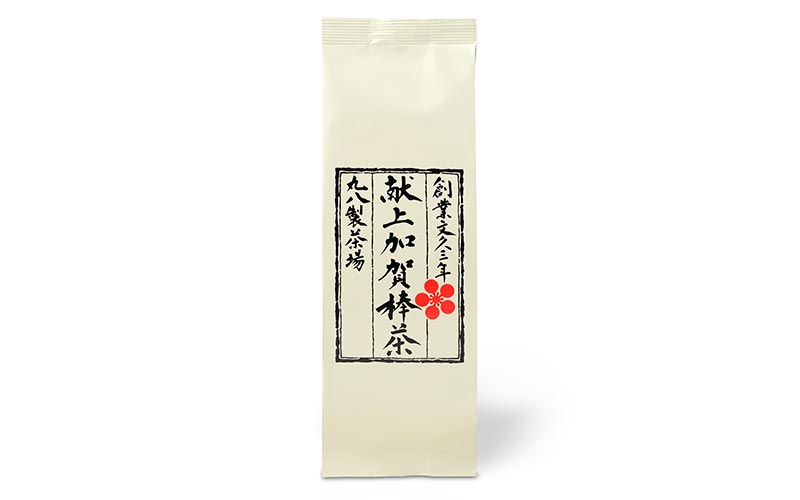 A staple of the Kaga and Kanazawa areas, this roasted tea is made primarily not from tea leaves, but rather their stems. This gives it a unique aroma not found in hoji-cha roasted teas made only from leaves, which pairs perfectly with everything from meals to sweets. Female snow crabs, known locally as kobako gani, are brought ashore at Hashitate Fishing Port in Kaga City, and these valuable crabs are served in a variety of small dishes made with seasonal vegetables and fish, alongside miso soup, Kaga Bocha roasted tea, dessert, and coffee, for a beloved local specialty. 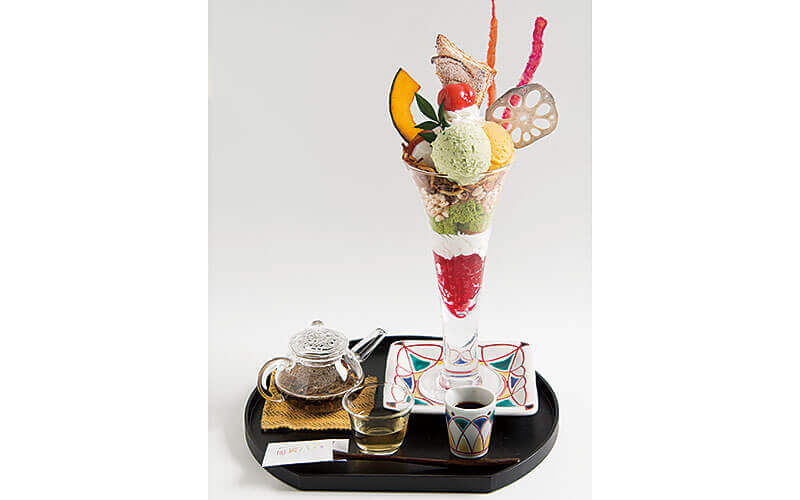 Five-layer parfaits made with local ingredients from Kaga City. Ingredients like soft-boiled egg and kabocha pumpkin-flavored ice cream are topped with Kaga Kutani vegetables, for a truly uniquely Kaga experience at each shop that serves their Kaga Parfait. Kaga City is famous for cuisine made with wild duck, caught using traditional sakaami thrown nets. Duck hunting season lasts for three months each winter, and only about 200 ducks are caught each year, making this pleasantly springy yet not at all gamey duck meat a delicious rarity. 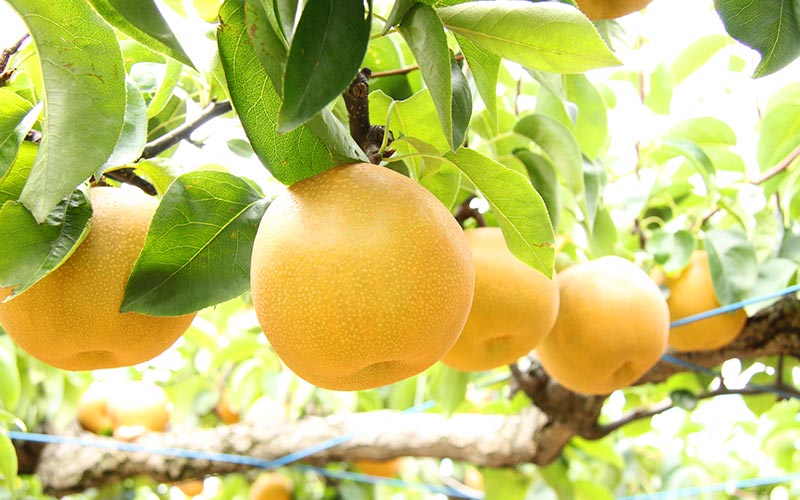 They grow Kosui, Hosui, Nijisseiki and other pears in the hilly areas of AwaraCity. Each year, many families are visiting pear orchards which offer pear-picking. Persimmons growing on the hills of Awara City are characterized by their square shape and lack of seeds. Their astringent taste is carefully removed over an adequate time, leaving a taste of crunchy texture inherent to persimmon. Their harvest time is from October to early November. 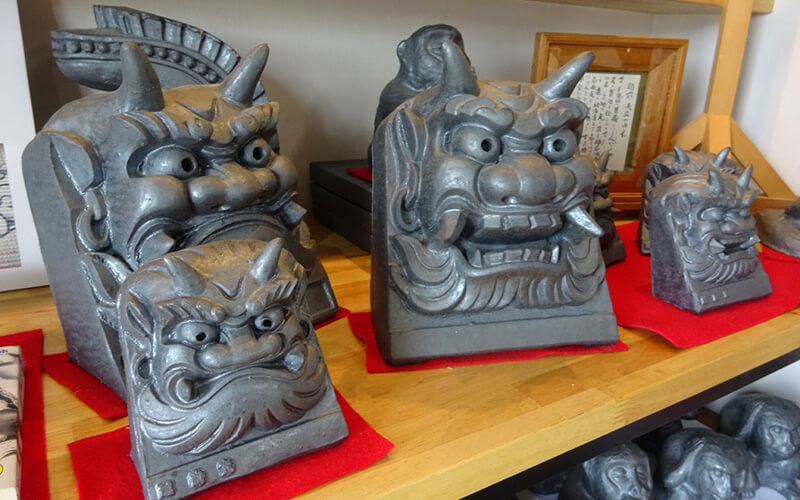 Awara City / Throughout the year

Onigawara is a type of tile with face of Japanese ogre, which is installed as a protective charm mostly at the edges of a roof. These tiles are made of ""Echizengawara (Echizen tile)"" which is produced in Fukui. At “Machinaka Onigawara Kobo (Onigawara workshop in the town)"" you can purchase figurines of Onigawara (ogre tile) produced by Masayoshi Nishigori who is the only craftsman specialized in Onigawara in Fukui Prefecture. We recommend them as gifts or lucky charms to be placed in your room. 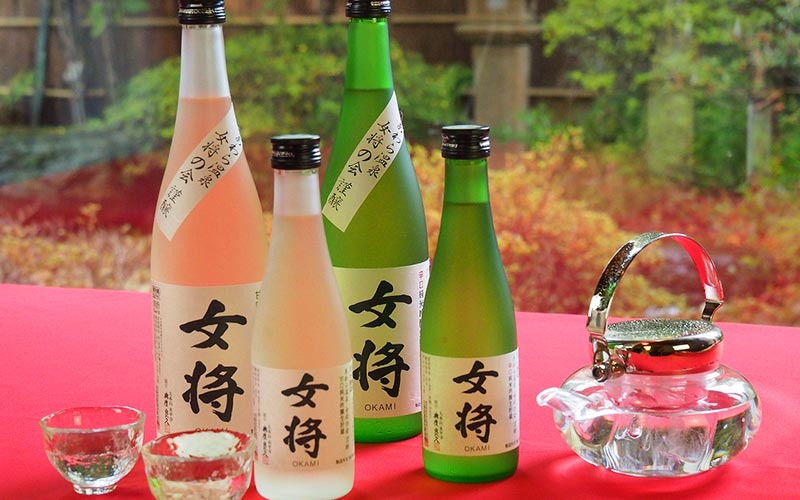 All 13 landladies of inns in AwaraOnsen have acquired qualifications for kikisake-shi (sake sommelier).This is a sake produced with great care and effort by those landladies who worked consistently on it from making of sake rice to preparation stage.Only people staying at the designated inns in AwaraOnsen can taste this limited item. In addition, ""Okami Cocktail"", of which recipeswere invented at different inns based on ""Okami No Sake"",are offered at some inns. 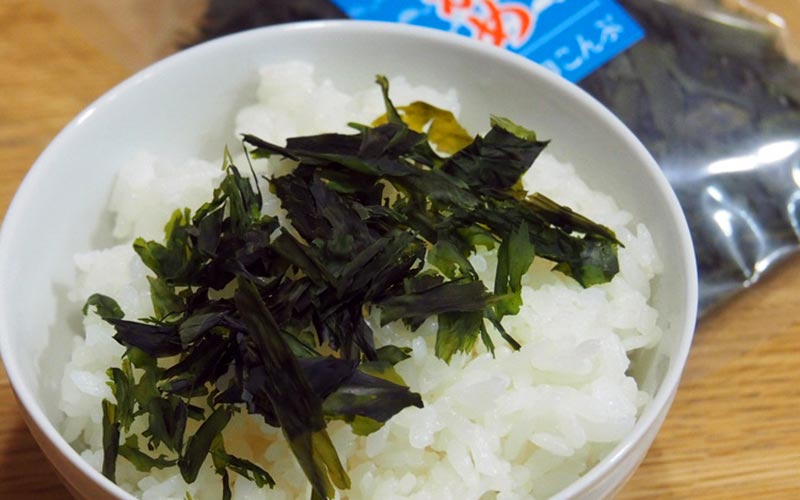 It is a wakame seaweed collected by ama (Japanese traditional female diving collectors), dried with salty wind and sun. There are two kinds in its form, either plate or powder. Since the wakame is full of umami (savory taste), it is good to sprinkle its kneaded powder over a bowl of freshly cooked rice, or put it in a cup of osuimono (Japanese soup). Sakai City / April through May

This is a tsukudani (preserved food boiled in soy) made by carefully salting white-stalk gobo (burdock) , all of which parts such as roots, leaves and stems are edible. The scent and flavor of the gobo spread in your mouth, and once you started eating them, you cannot stop. They go well with bowl of rice, or cup of sake. 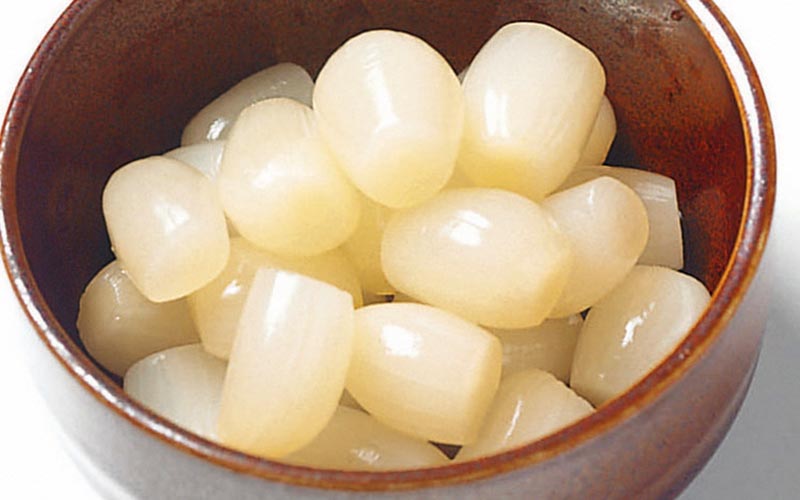 This is a special vegetable from the town of Mikuni, grown in three years. It is characterized by its tiny size, firmness, fibrous substances, and crispiness. You can enjoy tasting it in various ways and forms such as sweetened vinegar pickles, pickles with pepper, and wine pickles. 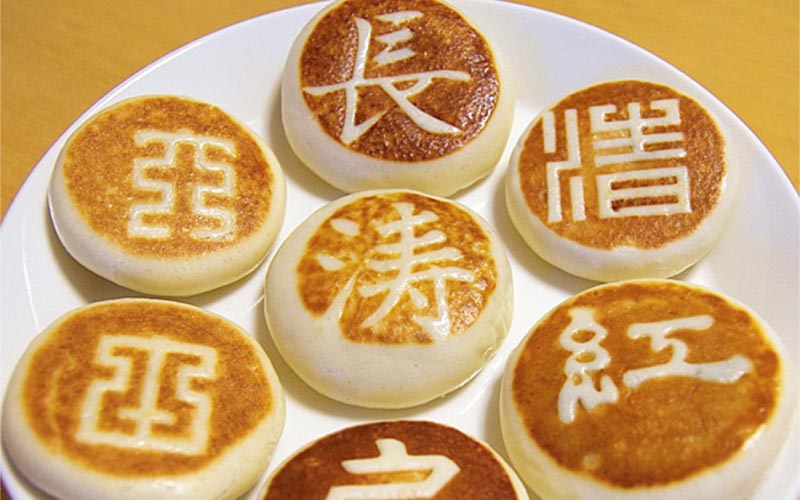 This manju (Japanese sweet bun) is a local confectionery of the town of Mikuni. Method of its making was learned from the sailors of Kitamaebune ships and has been passed on to today. The flavor of sweet and sour sake on its skin harmonizes with the tasty sweet bean paste. The most notable feature is that different stamp is pressed on the surface of the manju at each shop who made it. 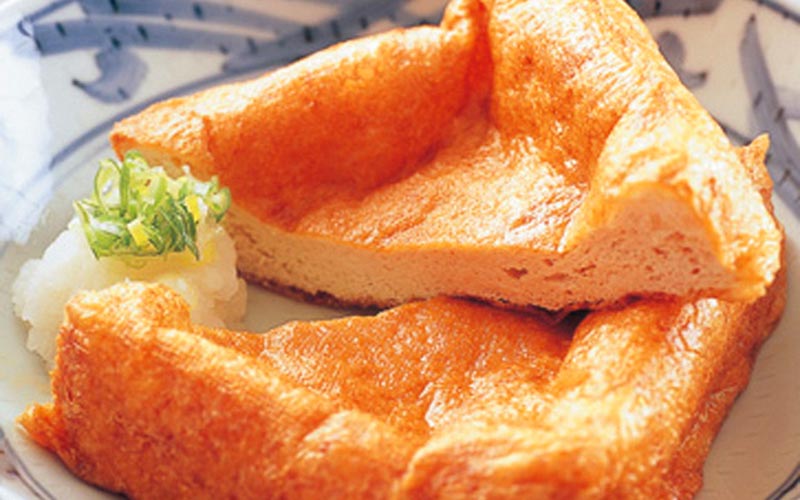 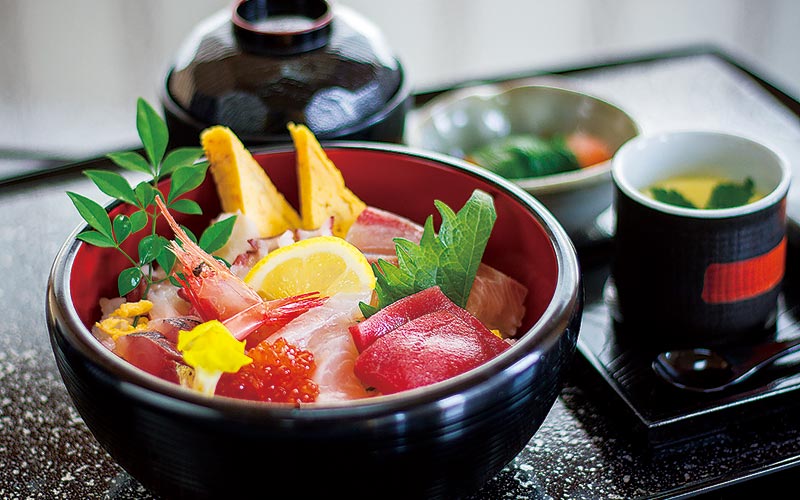 Sakai City and Kaga City / Throughout the year

Rich seafood is one of the most favored features of the Echizen Kaga area. With fresh seafood piled up over its rice, Kaisendon is particularly popular. Let's enjoy its exciting taste. Eiheiji Town / Throughout the year

Shojin Ryori of Daihonzan Eiheiji temple is a type of cuisine that has been handed down among the monks of the temple. There are restaurants offering Shojin Ryori lining up Eiheiji Monzen-dori Street. Made mainly of tofu and vegetables, they are healthy and recommended for vegetarians as well. More than 10 varieties of melon are grown in Awara City, with both orange and green flesh, in various colors, shapes, and flavors. Enjoy their smooth, tender texture, rich aroma, and wonderful sweetness.